We open the penultimate episode of the season with a shot of Bloody Peatsaí lying unconscious on the living room floor, having tripped over a pile of septicemia and hit his head. Well, slán, a Pheatsaí. We then cut to Keane’s, where Adam takes a break from selling bondage gear or whatever they do there to call Laoise an old drunk, which gives us hope that the old Adam may be returning, but sadly it turns out he thought she was Peatsaí. It’s unclear whether she’s more annoyed about being called an old drunk or about being mistaken for Peatsaí. Anyway, she’s here looking for Micheál, who of course never sets foot in the place anymore, and then asks Adam if he’s got any empty boxes she can use for her upcoming move. The old Adam would’ve rolled his eyes, asked, “Do I look like an effing box factory?” and then stolen her wallet, but because he is the Caring, Sharing Adam of 2018 he tells her he doesn’t think he has any boxes right now, but he’ll be happy to bring her some later. The line between Adam and Ned Flanders is getting uncomfortably fine. 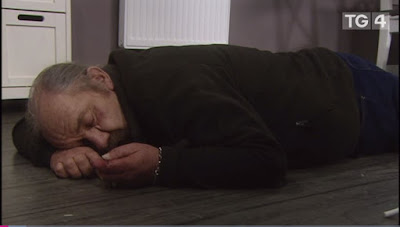 Laoise runs into Máire as she wanders down the street and asks if there’s any news from Fia. We are initially confused by her giving a damn about anyone other than herself, particularly her longtime nemesis Fia, but she quickly makes it clear she’s expressing concern for Fia’s well-being facetiously and is actually using this as an opportunity to talk shit about what a spoiled little madam Fia is. Remember when Laoise wasn’t grindingly negative all the time about everything? I miss that. Máire explains that Fia is off travelling around Europe or Asia influencing people, places, and things right now, which presumably involves shouting “Stay fierce!” at inanimate objects as she falls in a canal. After 17 more minutes of dragging Fia through the mud in absentia, Laoise decides to tell Máire that she and Eric are moving in together, which gives Máire an opportunity to faint a lot about living in sin and getting the milk for free and how 10 out of 9 people who live together without being married die of carbon monoxide poisoning within the first 72 hours. Laoise is surprised by Máire’s disapproving and tut-tutting, having apparently never met her before, and then they wander off in different directions. Thus ends another successful Ros na Rún social interaction. 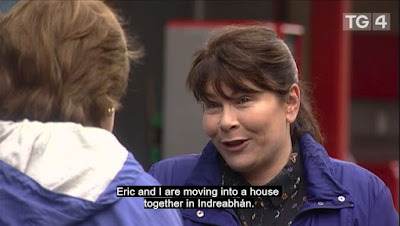 I Might Have Tried Washing It, But Maybe That's Just Me

Have we discussed the fact that Ros na Rún won Ireland’s Villagiest Village? And the grand prize was a beanbag chair and a selfie stick for the teen hangout room we have never seen? I’m not sure it was the most thrilling result for a storyline that went on for a year—using the money to build a monorail would’ve been more interesting, especially when Áine hijacked it and crashed it into the side of Tayto Park—but I suppose it’s satisfying to know that Ros na Rún is, in fact, the villagiest village in all of Ireland. That will look much nicer on the signs than “The Murder Capital of the West.”

Anyway, it’s a new day, one on which there will be no screenshots because: TG4 website weirdness. We open out in the street where Frances checks her account balance at the ATM and then frowns in the direction of the pub. She senses that perhaps there have been further financial shenanigans on Tadhg’s part, with Exhibit A being that there is no money in their joint account and Exhibit B being that on her ATM receipt there is a picture of him giving her the middle finger. This is why, in the absence of a pre-nup, the first thing you should do when you get married is kill your spouse before he or she gets a chance to take all your money.

At the B&B, Máire is furiously rosary-ing, and we get the impression this has been going on for a while because her beads are smoldering. Berni offers her a nourishing bread sandwich, but she pushes it away because her simultaneous love and disgust for Fia are all the sustenance she needs, like those monks in China who mummify themselves by eating a lot of cedar chips and potpourri.

Meanwhile, in a very artistic cut across town that shows we are all universally connected sandwich-rejecters, we see Bloody Peatsaí, whose sobriquet has never been more accurate than it will be today, pushing a sandwich away and coughing dramatically. Sorry, Peats, but each soap only gets one death-by-coughing per season, and we’ve already had ours for this year. Deaths that are still up for grabs include “standing too close to a windmill” and “getting pushed in front of a bus by Adam.”
Read more »
Posted by Rich at 2:25 PM 6 comments: