The Pest of the West

We open at Keane’s, where Adam takes a break from teaching gorillas sign language or whatever they do there to listen to Mack inform everyone that his buddy Niall here is babysitting Liam Óg today. I’m not sure it’s technically babysitting if it’s your own child, but OK. Laoise impatiently tsk-tsks that she already knew about this because she heard Máire complaining about it earlier, because if there’s one thing Laoise can’t stand, it’s complainers. Mack and Niall leave as Cóilí Jackie arrives, slaps €75 he may have drawn with crayons down on the counter, and demands ten more bags of yesterday’s discount fertilizer. Adam informs him that he knows he owes €100 for yesterday’s crap, and that he better pay up, or else Laoise here is going to keep sneering at him and calling him a thief. Cóilí Jackie leaves to spread his mayhem elsewhere, and Laoise takes this opportunity to get another dig in at Adam, reminding him that none of this would’ve happened if he hadn’t decided he was too good to keep using cuneiform chiseled into clay tablets like Micheál has been doing since he came here from Mount Ararat and opened a jump-rope factory or whatever this place is. Adam looks pained, and it’s worth noting that there is an identical cactus to the one from last episode on a shelf next to the mousetraps, which suggests that either Micheál is stocking multiple cacti now or that Cóilí Jackie decided the last one was an extravagance and returned it to get his money back. 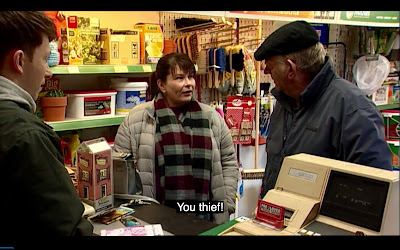 At Gaudi, Pádraig asks Katy if he can have the weekend off so he can take Sam camping in Inis Oírr, which you may be interested to know has an average score of 4.9 out of 5 stars on Google Island or whatever this page is that I landed on when I was looking up how to spell “Inis Oírr.” It seems the Aran Islands as a whole got docked a tenth of a point for producing Berni. Anyway, Katy reminds him that she can’t cover for him because this is the weekend she and Jason are going to Dublin to take some nice family photos of the two of them screaming at each other in front of the Book of Kells. It’ll be a nice change from last year’s family Christmas card, which showed Katy smashing Jason’s iPhone on the ground at a bullfight. Pádraig says he understands, and then pauses for a moment before shamelessly launching into the story of how the only reason Sonia’s offered to let him keep Sam is that she’s going to a wedding in London, and that this will almost certainly be the last chance he ever has to see Sam before we all die of global warming and so on. Clearly this is all a total load, because none of us believe for one minute that anybody would invite Sonia to their wedding. Anyway, the guilt trip works and Katy says that he can go and she’ll leave the place in the capable hands of Sinéad, who as usual is just out of frame whenever she’s mentioned, but the way Katy nods in her direction tells us she’s TOTALLY a real person who is RIGHT THERE. 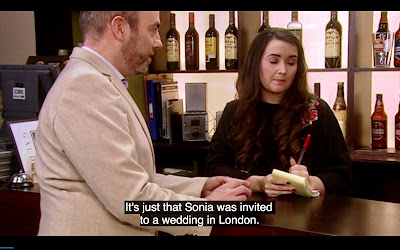 Ten Bags of Manure and a Comedy Cactus

We open with Mack chasing Fia into the shop, assuring her that he’s not here to stick his nose in her business, which she’d understand if she’d just stop and let him stick his nose in her business for a minute. She tells him to buzz off unless this is about something other than his BFF Niall, which is going to put a serious crimp in the conversation, because the only other thing Mack likes to talk about is the time he saw somebody in Aldi who he thought was Ross Kemp but it turned out wasn’t. Anyway, before Mack can fully buzz off, Niall appears outside the shop window carrying his backpack, so Fia shouts at Mack that she can’t believe he did this, although of course it’s really the only believable course of action here. Mack looks sheepish, and Fia’s going to feel bad when it turns out Mack had nothing to do with this and that Niall and his backpack are actually here because Ros na Rún is coincidentally hosting the World Boy Scout Jamboree this week. 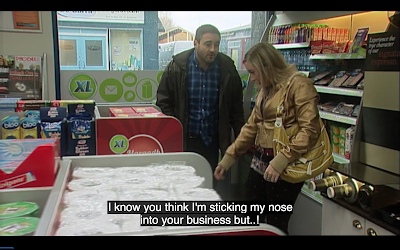 Mo emerges from her bedroom in her robe and finds Colm and David, only one of whom is supposed to be at her kitchen table this time of day. Colm should leave immediately! David has of course stopped in on his mail rounds for a light buffet breakfast, and then stupidly decides to put his foot way up in it by joking about how it’s nice for some lazy sods like Mo who are able to sleep late and laze around in their bathrobes when they’re not busy puking up their chemo drugs. Eventually he realizes what he’s said and tries to dig himself out of it, but Mo has met him before and is therefore surprised only by the fact that he stopped himself before saying, “I wish I had cancer!” and putting his head down on the table for a sob. She lets him twist in the wind for a while before he finally throws today’s letters at her, some of which may actually be intended for her or Colm, and runs out the door. Unfortunately for her, one of them is a bill from the hospital demanding she pay €5000 for the chemo she’s had so far. Colm assures her it must be a mistake because her insurance should be paying for it all, but she looks worried. Clearly the solution is for Mo to stop opening letters from the hospital.

Home Is Where The Hate Is

It’s morning at the pub, and Katy apologizes to Tadhg for the fact that Jay was so noisy last night, what with his teething and trying to teach himself “Smoke on the Water” on the guitar and so on. Tadhg says Jay is just like his mother, who also never shuts up, but then tells Katy she and Jason are welcome to stay at the pub as long as they want. After all, he says, it’s Jay’s home. Cuán is on his own, I guess. She thanks him and, as she’s going out for a walk, tells him that Jason is having a lie-in, because radiating omnidirectional anger at all times is exhausting. Tadhg replies that she’s clearly spoiled Jason, causing her to look sadly into the middle distance, which is her new favorite hobby. 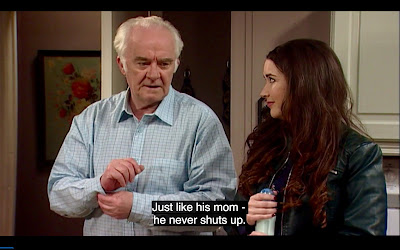 Across town, we have our first-ever sighting of David and Gráinne’s bedroom, which has fewer crystals and karate trophies than we would’ve imagined, but exactly as many whips and ball gags. She says maybe Pádraig has forgotten about that “swapping bedrooms” arrangement we first heard about last episode, and just as David is weakly agreeing, Pádraig arrives to wish them a happy Get The Hell Out Of My New Bedroom Day. Because he is a great humanitarian, and because he’s still busy burying Sonia’s body under the floor of his old bedroom, he gives them till the end of the week to get lost, at which point Gráinne prods David into offering an extra €50 per week, month, or year to let them keep the big bedroom. Pádraig considers this for half a millisecond before replying that naah, they’ll stick to the original agreement, and when she starts fussing that they’ll never fit all their crap in the smaller room, he brightly explains that this is a great opportunity for her to throw out all the old junk she no longer needs. It’s nice that he doesn’t add “such as David” even though we all know that’s what he means. He disappears down the hall to start taking all his Daniel Craig and David Beckham posters down, at which point Gráinne informs David that there’s no way in hell she’s moving into that small bedroom, and the look in her eyes suggests that Sonia may not be the only one buried under Pádraig’s floor by the end of this episode. 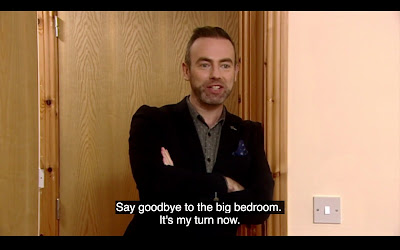 We’re back after a mini break during which there were a couple of unrecappable episodes. By “unrecappable,” I mean “if I had recapped them in my usual fashion, I would go to hell.” So I will just tell you that the important things that happened are that Sonia ramped up to a Level 12 Assfactory, but it turns out the man she caught Pádraig in bed with was her brother, which caused us all to laugh heartily enough to almost make up for the intense, continued misery she’s caused us for months now. Berni moped around a lot about Briain because she was really looking forward to making his Easter basket and hiding eggs in the garden for him to find, and when she finally decided to try calling him, he told her to buzz off and leave him alone. O’Shea and John Joe flirted a lot, meaning they will probably give birth to a bunch of children with hereditary bad backs, and somebody probably died, but I CAN’T SEEM TO REMEMBER WHO. 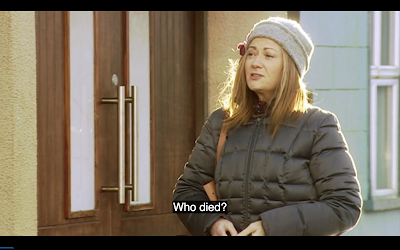 Anyway! That was then and this is now and “turn, turn, turn” and so on. I hope they replace Maggie with that giant plastic ice cream cone in the opening credits for the rest of the season.

We open with Tadhg standing outside the pub in the rain trying to sweep a puddle, which seems like a totally well adjusted thing to do, that’s for sure! Next he’ll be trying to wipe reflections off the windows. He pauses to look meaningfully at the “Ó Direáin & A Chlann” sign and then leans on his broom for a while wondering whether the picture of the chicken will go to the left or the right of it when the pub becomes a Nando’s next season.