We open at the café, where Gráinne presents Mo with an envelope allegedly full of the money they raised for her medical bills at the radio auction thing. She cautions that the money hasn’t come in yet for Cóilí Jackie’s Ming vase once owned by Superman, which leads to a discussion of how he acts like a belligerent old lunatic you’d see on the corner yelling at a lamppost, but that deep down, he has a good heart. Remember this for later. Mo leaves to go thank him for his generosity, and I have no idea why everyone’s assuming he had any idea how much the vase was worth when he donated it, but I’m sure it won’t come back to bite us all in the arse later this episode.

Over at Maggie’s, which Pól and his intermittent paramour Fia are quickly transforming into Squat II: Electric Boogaloo, he’s shoving Maggie’s old tat into bin bags to be taken to the charity shop and/or thrown at cars from a highway overpass for laughs. Pól is like a box of chocolates: you never know what you’re going to get, and sometimes it turns out to be a laxative. Fia arrives from the shop, which you may recall is officially open now that Donny Osmond or similar has broken a champagne bottle over it, and she’s carrying a bag full of essentials for Squat Life, including the 3 B’s: beer, bog roll, and botulism. It’s unclear whether she’s still a vegetarian now that she and Niall are on the outs, but if so, there is probably also bok choy. There is light domestic dramedy during which they pretend to know who John Denver is, and Pól gives Fia an antique brooch she’s been admiring while he relates a story Maggie told him about the time she and Janis Joplin crashed a blimp into Woodstock while Jimi Hendrix was onstage. Fia decides they should spend the day listening to all of Maggie’s records as a tribute to her, which is sweet, and additionally a way for her to stay away from Máire and Liam Óg all day.

Back at the café, an emergency meeting of the town deadbeats and some extras has broken out because the Ireland’s Villagiest Village people have announced a surprise visit from the judges today. As usual when there is tepid community activism on display, Micheál is in charge, and I’m still not sure whether this is more or less exciting than last season’s windmills were, but then Pádraig didn’t give the entire town mass diarrhea and vomiting during the windmill storyline, so I guess I’ll give the edge to the contest. Caitríona, who has taken a break from her crime spree to be here, volunteers to give the judges a tour of the various Caitríona-related landmarks around town, pointing out that they’ve probably heard of her from that time she made Santa and all those orphans cry during the Toy Show. Micheál agrees that Caitríona giving the judges a tour is certainly an idea with a subject, a verb, and an object, but also wants to make sure people who are not Caitríona have a chance to propose ideas. For example, ANYTHING ELSE. Eventually it’s decided that since there are three judges, they will split them up because it is usually easier to murder people and steal their identities individually than in groups. Amy will take one to the community center because judges like windowless rooms full of IKEA furniture, Laoise will take one to the polytunnel because judges like to see places where David has been shot, and Caitríona will take the third judge to see Loinnir to be packed in seaweed and dug up 3000 years from now as a bog body. Micheál is satisfied with this plan because his sources tell him that so far the none of the other contenders for Ireland’s Villagiest Village have managed to keep more than one out of three judges alive till the end of the day, and besides, we’ve all forgotten what the point of this contest is anyway. 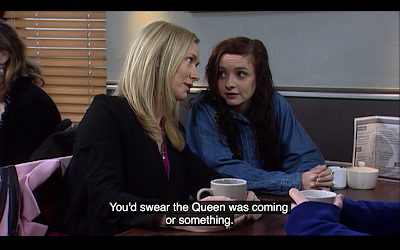 Don't Stand So Close To Me

We’re back after a week in which we had a very special guest star in the form of Daniel O’Donnell, and like the last very famous guest star Francis Brennan, I don’t know who he is. Unlike Frances Brennan, however, I am pretty sure Daniel O’Donnell is not Gordon Ramsay’s father. Anyway, we were treated to famous singer/actor/chef/something Daniel O’Donnell as part of the grand opening festivities of the shop, which has been open for 8 months. We won’t go into the part where Vince made up the whole thing about having a celebrity lined up, presumably figuring it would all work out because either a) the entire town would forget about it or b) a famous celebrity would happen to wander through at the desired time while carrying giant ceremonial scissors. Clearly years of living with Caitríona has started to erode Vince’s brain. More excitingly, Caitríona got arrested twice in one day, once for starting a catfight in the street with Bobbi Lee and once for being a complete wagon to Dull Tony, who unfortunately for her is a police officer.

We open at the B&B, where Niall informs Fia he has a date today and she turns various shades of purple because it’s not with her. He thinks she’s flustered by this news because she can’t imagine him dating anyone other than her mother, but of course Fia does not give two shits about Vanessa and instead has been batting her eyelashes so furiously in Niall’s direction lately he should start wearing safety goggles. To throw him off the trail, such as it is, she makes up a story about how she’s got a date today, too, with a young lad named, errr, George Glass, but she’s sure Niall doesn’t know him because he’s from, umm, two towns over. Niall isn’t sure he cares about any of this, but he tells her that any lad who’s going out with a girl—nay, woman—like Fia is a very lucky boy indeed, no matter how theoretical he may be. 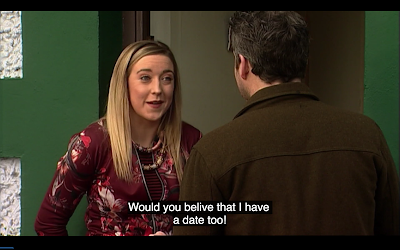 We’re back after a brief break that mostly consisted of Katy and Jason fighting a lot and Ferdia being an asshole all the time. Now that you’re all caught up, today’s episode opens with Katy and Jason returning from their delightful half-price holiday that famous philanthropist Ferdia gave them at a hotel that was being dynamited the following day due to its fatal levels of ambient uranium. They are, of course, greeted at the pub door by Mack, drawn here by his irresistible magnetic attraction to Katy’s uterus, and his complete obliviousness to toxic awkwardness. Katy suddenly remembers she needs to be somewhere else and Jason picks up exactly where he left off before their minibreak, i.e., glaring at the back of Mack’s head. In case you missed it, this is all because the Hello Kitty DNA app on Katy’s phone revealed there is a 0.0% chance Jason is Jay’s father and also a 94% chance Katy and Dee will not be speaking to each other by the end of the season.


Over at the NoneFM studios, Caitríona is rattling off a list of work she will take credit for after Amy does it. This includes doing a live broadcast from the cabbage-and-USB-cables aisle of the shop, supervising a group of student interns who will be surprised when they get here and discover it is not actually RTÉ Radio 1 as they were told, and, if time allows, photocopying their bottoms and mailing them to Máire. Amy starts making her usual “I have made terrible life choices” face but is interrupted by the arrival of Gráinne, who’s here to ask if they’ll make an announcement on whatever garbage show is on right now about tonight’s fundraising table quiz for Mo, Incorporated. Caitríona smiles and says yes, which means “yes, unless it requires me to exert one iota of effort,” but Amy says she’ll take care of it by having Bobbi Lee make an announcement on her show, which is the only program on this station anyone listens to.

Across the room, Tadhg arrives and starts yelling at Frances that she’s practically emptied their joint bank account and he’s not happy about it. Well, maybe you should’ve looked up the meaning of the word “joint” before now, maith an fear. She asks him to keep his voice down, because she has never met him and is under the impression he cares what anybody thinks. He screams some more, and she hisses that life is expensive, especially now that she and Áine have developed a taste for tiaras, but that if he doesn’t want all their personal business to be on the radio, perhaps he’d like to go in the other room and discuss this calmly over a nice bowl of diamond soup.