We open today’s tale of vague thuggery and pointed bitchery at Caitríona’s, which coincidentally is Europe’s primary exporter of both of those things. She’s not there, though, apparently off on a bad-will tour of the county, but Vince and Michelle are. Normally this would make things more pleasant, but Michelle is skittish and distracted, and though Vince tries to be sunny and cheerful, she and her glum ponytail are having none of it. You can tell things are bad because she didn’t even have the energy to put on her headband today. I was starting to assume it was tattooed on, really. Eventually Vince leaves, having failed to recruit Michelle to sub for him today as Caitríona’s personal social worker, and then Michelle gets a text from Andy demanding his money or he’s going to start breaking her everything. She looks scared and then goes over and dramatically locks the front door. Another option would be calling the police, but we’ll go with this, I guess. 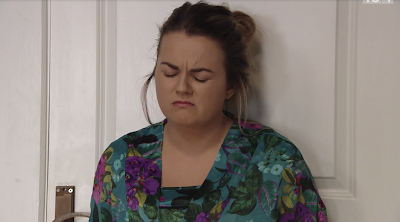 Over on Daly Estates, Cóilí Jackie and Noreen have come to visit Dee, presumably separately since we can’t imagine she would allow him in her car. She’s being all sweetness and light, thanking him for saving the baby’s life by helping Dee give birth in that ditch and so on. If he really wanted to be helpful he would’ve told her it would be a lot easier for the baby to come out of she weren’t sitting up, a problem he rarely has with his cows. I will give you a moment to picture a vertical cow standing on end like a child’s drawing rotated 90 degrees before we proceed. Anyway, Cóilí Jackie appears to be understanding about 30 percent of what is being said, which is pretty good for a non-Donegal character in a scene full of Dalys, and everyone is having a lovely time until he brings up the fact that Dee’s asked him to be Bláithín’s godfather, at which point Noreen develops a sudden case of diarrhea face and stops talking for the first time ever.

A Romantic Bottle of Wine by Gaslight

Aaaand we’re back! A lot has happened since the last time I was able to recap, much of which involved Michelle being in every scene for no apparent reason, but I will try to catch you up as we go along. We open at Gaudi, which is somehow still in business, just as a power outage plunges the place into darkness. Pádraig arrives and asks Katy why she’s standing at the till in the dark, which at first seems a stupid question, but then we remember that he’s been watching her Dee-facilitated descent into madness for a while and probably just figures this is the next logical step, after ordering 600 lbs. of beef instead of 60 but before getting into an argument with a jar of olives. 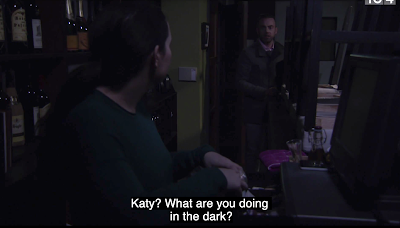 At their place, Berni and Briain are discussing the fact that Jude kept them up half the night, and it’s clear they are both fed up with this shite but know they will go to hell if they say it out loud. He presents her with a spa gift certificate and says they’ll go there this afternoon, and you can tell he’s serious because it’s from a legitimate spa in Galway and not just Gráinne kicking you in the spine at Loinnir. He even volunteers Bobbi Lee in absentia to look after Jude while they’re gone, but Berni reminds her that Bobbi Lee has an appointment to see a fortuneteller today, which is apparently a thing she does now. Briain’s suggestion that perhaps Evan could get his arse over here and acknowledge his grandmother’s existence for a change goes nowhere, because, as Berni explains, Evan finds Jude eepy-cray, and is also selfish. Briain frowns a lot at this, which history tells us means he and Evan will be wrestling in the street in the next 15 minutes. 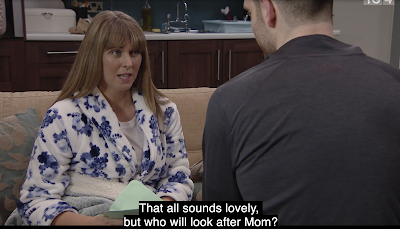 Recaps resuming week of May 6

The craziness that's severely limited my recapping for the past couple of months has mostly passed, so I'm planning to resume recapping the show next week! Watch this space for new recaps soon and thanks for your patience!
Posted by Rich at 12:53 PM No comments: