It’s the season finale, and there’s some serious craziness ahead, so let’s get right to it! We open, as we often do with Very Special Episodes, with a montage set to some sad minor-key piano music that suggests Adele is about to show up and wish her ex-boyfriend well even though he’s a complete bastard and she wants him to die. Instead, however, we get a close-up of Peatsaí’s pores looking rather lifeless and Mo sitting beside his hospital bed saying she’s sorry for ignoring him when he was carrying about “not feeling well” and “being on the brink of death” yesterday, although we all know it’s mostly Colm’s fault. We then montage over to a shot of Mack and Katy making awkward eye contact as she sits in the pub doing her geography homework, and then we’re at Micheál’s, where Laoise is shoving all her clothes into a black bin bag, which is where most of them belong. Hopefully this is the first step toward her getting a new wardrobe next year, preferably with more saturated colors like the lovely blue floral thing she’s wearing today. We complete our funereal montage by returning to Peatsaí’s bedside, where Mo reminisces about the good times they’ve had with him watching her rolling out the bins while having cancer and getting his ponytail caught in a mousetrap and so on. 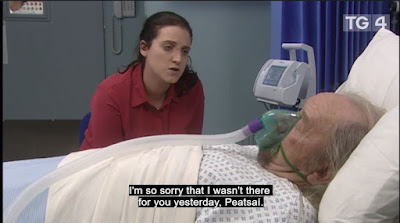 Back at the pub, Mack asks Katy if Jay’s imaginary bed was returned to the shop in time to get a refund, and in return she snots that she knows what he’s up to and she’s not falling for it. Of course Mack is one of the great devious schemers of our times, as evidenced by the utterly blank look he gives her in response to this accusation. Before it can turn into an argument over nothing like all Katy’s conversations do, Tadhg interrupts to ask Mack if Peatsaí’s dead yet, presumably because he’s wondering if he should gas up the hearse. Mack grimly reports that Peatsaí was completely unresponsive this morning, even by his standards, although it’s also possible Mack got confused and was trying to talk to a mannequin in the underwear department at Dunnes, which would also explain the plastic headlessness. Tadhg reports that he’s got to head over to the hospital later today to pick up a corpse anyway, adding that it sure would be convenient if Peatsaí died before then so he wouldn’t have to make two trips. Tadhg Ó Direáin: always thinking about his carbon footprint.

A cheerful Dee shows up, which is Katy’s cue to flee upstairs, but not before she asks if she can do her a favor and pick Jay up from the crÀeche, which will hopefully get its character encoding fixed over the summer, and drive him to his breakdancing lesson or whatever, but Dee says she can’t because she’s got a facial scheduled followed by a trip into town. Doesn’t she work anymore? Before Katy can inevitably attack Dee for being a selfish bitch, Mack volunteers that he could go pick Jay up, causing Katy to choke on her gristle sandwich and sputter that no, she’ll just put him up for adoption or burn down the town or something. She leaves, and Tadhg and Mack get into another spat about whether it’s funny that Peatsaí might die, and if so, how funny on a scale of 10 to 0, with 10 being “pants-wettingly hilarious” and 0 being“Mrs Brown’s Boys.” Dee, who you may recall has suddenly reached Adam levels of saintliness lately, starts berating herself for being thoughtless and swanning off to get a facial while poor, harried single mother Katy barely has enough time to make out with Mack in various locations around the greater Europe area. Yeah, Dee, you’re the problem here. 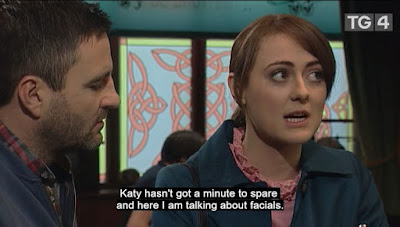