Someone's Been Sleeping in My Bed!

We open upstairs at the pub where it first looks like Tadhg is doing jazzercise, but it turns out it’s just a highly choreographed yawn. Strictly Come Yawning. Maggie, in her night things, sashays into the kitchen, and in the ensuing conversation we learn that Tadhg’s been sleeping in Áine’s bed, which is why he’s so stiff and exhausted. (Get your mind out of the gutter—it’s Christmas, for God’s sake.) He makes a big production out of struggling to put his wristwatch on, which gives her a chance to feel his bicep and stand very close to his whatever, and it looks like they might kiss, or alternatively rake all the dishes off the counter and have sex on it, but then they decide to put the kettle on instead. It’s a Christmas miracle! 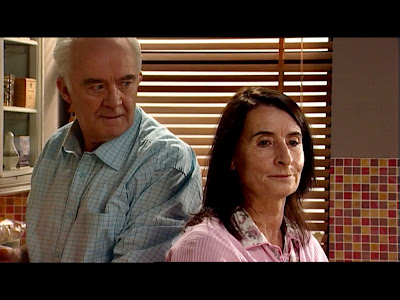 Outside, a band of roving—well, I don’t know what they are, but they appear to be the Mamas & the Papas—harass Briain and David until they give them money to go away. This is either a holiday tradition I am unfamiliar with or an elaborate fancy-dress protection racket. Once they leave to terrorize the next batch of innocent pedestrians—hopefully Máire, since she’s about seven-eighths of the way to a heart attack at all times anyway—Briain starts apologizing to David for being constantly underfoot and assures him he’ll move out as soon as he can find his own place. David tells him there’s no rush, but just then a sour-faced Pádraig makes a show out of squeezing past and shooting daggers at them both, so it seems he’s not happy about the new living arrangements. There’s only room for one interloper in that house, no matter how newly gay Briain claims to be. At this, David gives Briain some friendly advice on how to get along with the more persnickety residents of the house, such as putting the milk back in the fridge after he’s done drinking it straight out of the carton and also flushing the bog after doing his filthy, filthy business.

Just then a passing Berni inserts herself into the conversation, wearing one of the elaborate “as seen on the Titanic” hats she and Caitríona are so fond of, but it quickly becomes clear that David is totally pissed off at her for chucking his poor cousin or nephew Briain out on the street. He stomps off in a huff, and Briain remarks that Berni’s brilliant Operation: Gay plan isn’t as easy as they thought it would be. Everybody who thought this plan had any chance of succeeding whatsoever, raise your hand. Berni purses her lips and says it’ll continue being a mess as long as he’s living at David and Gráinne’s, hmph!, so it seems she’s not going to be satisfied until she’s literally got him living in a dumpster. He tries to tell her that he’s not comfortable with all this lying, but she interrupts to volunteer brightly that she’ll look through the “to let” section of the paper to see if there are any rentals going in the area. Great, that’ll save him eleven seconds. He shouts that she’s not even listening to him and storms off, leaving her and her 1920s Olympic swim cap looking confused. 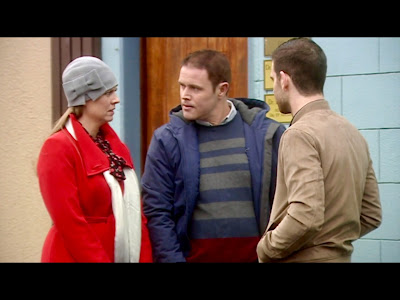 And the Bells Are Ringing Out for Christmas Gay

Aaand we’re back! As you may or may not have noticed, depending on how invested you are in my nonsense, Ros na Recaps has been on vacation for a few weeks, during which I actually went to Ros na Rún! No, seriously, I went to Spiddal and visited the studio/set in real life, not in a dream sequence resulting from mixing Ambien and Bailey’s. I’ll be posting a report on my day in Ros na Rún in a bit, but for now, things have gone completely mental while I’ve been away, so let’s get right to it!

We open at the front door of the B&B, where Niall, about whom we have been having ambivalent feelings lately, has come to hand-deliver a document to Fia. We know it’s important because it’s in a plain brown envelope, like your dad’s Playboy magazine circa 1983. She asks him what it is, but he only tells her she’s got his number if she has any questions about it and then goes away. She opens it and then makes a face that indicates vague surprise, or perhaps wind, and it looks like she, like us, wishes the show would hurry up and make it clear how we’re supposed to feel about Niall already so we can get on with feeling it.

At the shop, Adam is complaining to Vince that the life of a liberated gay twenty-something is an exhausting one, what with being up until 5am every morning dancing to the Game of Thrones theme tune or whatever the gays are dancing to these days. Anyway, the all-night dance party is the reason he’s dragging his ass this morning, but Vince is more interested in the fact that one of the cases of wine that was delivered yesterday seems to have disappeared. When quizzed on whether he might know anything about this, Adam is evasive in a way that actually looks pretty guilty, although because we find ourselves rooting for him these days, we would prefer to imagine that Annette, who is an infamous thieving thief who thieves, stole the wine for her six to eight children. Adam wanders off noncommittally, and Vince looks sternly at the greeting card rack, wondering if there’s one that says “Sorry for Firing You at Christmas” in, like, a manly way. 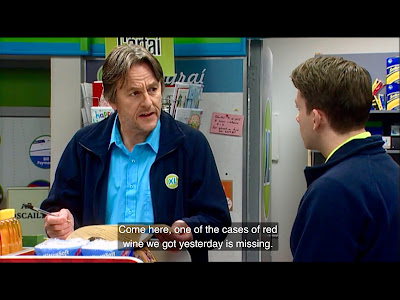 Hi all! I’ll be traveling over the next couple of weeks and won’t be able to recap, so look for new recaps and other new Ros na Rún-related content resuming the week of Dec 26!
Posted by Rich at 11:38 AM No comments:

Give Us This Day Our Daly Dread

This will be my last recap until after Christmas, because I’m heading off to Europe for a couple of weeks. I’ll return after the holidays with a recaplet of what we missed, and should have lots of all-new Ros na Rún content to share with you as well!

We open at the B&B, where Niall and Fia are busily kissing Vanessa’s ass, because they feel guilty about having slept together three years ago and because they figure she will be finding out about it soon, and they each want to be the one who has a chance of fleeing while the other is being murdered. Of course Vanessa is eating this up, and trots off happily to the day at Loinnir Niall has booked for her. Loinnir: When You Care Enough To Give The Bare Minimum™. Once she’s gone, Niall and Fia breathe a sigh of relief because they are both still alive and also because it will give them a chance to fight some more. She says she’s on her way to the café to have a word with blackmailing creep Pól, and he points out that none of this would’ve happened if she hadn’t opened her big mouth. She swears she didn’t tell Pól anything, and then they argue for a while about who told whose boyfriend what and who got pregnant by whose mother’s husband, and eventually he warns her that if she doesn’t sort things out, Pól is going to ruin both their lives. She tells him to leave it to her as she’s sure Pól will listen to her, since he’s always shown himself to be reasonable, considerate, and dependable in the past. I mean, remember that time he shared those pills he found on the ground with her?

We see someone pulling a suitcase down the street, and it turns out to be…Katy! It would’ve been more of a surprise to see her if her presence in the new opening credits hadn’t made it clear that she would be back eventually, but still. She barely recognizes the place, what with all the new high-rise buildings and the fresh coat of paint on the plastic ice cream cone outside the shop, but her apprehensive looking around and the fact that Jason is not there raises one giant question for us all, which is: How quickly can Dee arrive and start fighting with her? 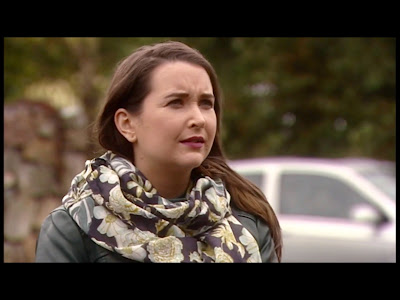 We begin in the B&B kitchen, where Niall is eating his fingers off while looking at photos of Liam Óg and trying to figure out if he looks like him, but Fia, who will we charitably say looks like she’s been having a rough time of it, keeps insisting that Liam Óg’s father is Danny, a.k.a. Ganja. She asks him to knock off this line of questioning, and when he asks how he can be sure he’s not the baby’s father, she replies that, as she’s already told him, it’s just not possible that he’s Liam Óg’s father. Well, I’m convinced. When he points out that this is a completely stupid non-explanation, she makes up some nonsense about having been on the pill when they slept together and then getting pregnant on the plane between Australia and Ireland or whatever. She was trying to press the flight attendant call button to ask for a ginger ale, but she accidentally pressed the “unintended pregnancy” button instead. He says he supposes he believes this story, which of course means he realizes it’s a complete load of crap, but is going to convince himself it’s true because he does not want to ruin his figure by having a baby right now. 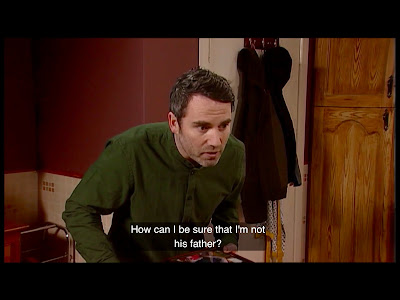 Over at Mo’s place, which is apparently Mo and Colm’s place already, they’re giggling and carrying on about the loud, acrobatic sex they spent all night having up against the window, which overlooks a daycare center. He is a terrible influence on her. She asks him to pull a sickie so they can stay home and have sex in the kitchen sink all day, but he says he has a big day of doing whatever it is he does ahead of him and besides, his equipment is worn down to a nub right now. They’re unappealing for a while, but I suppose if having him back stops Mo moping around like she’s been doing all season, it’s worth it. Possibly. Also, I think Uncle Peatsaí died. 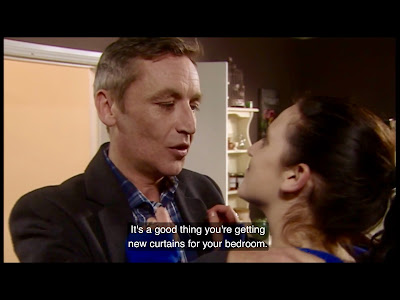