Happy Christmas! Hopefully you all had lots of awkward family time, like the kind Sorcha is having with her visiting mother in our opening scene. The mother probably has a name, but I don’t know what it is, so I’m going to call her Bettina. By the look in her eyes and her slightly-off mannerisms, plus the sick look on Sorcha’s face, we can tell that something is Not Quite Right with Bettina, who is currently touring the House of 10,000 Residents and declaring that she bets there are a lot of dance parties and quilting bees and so on happening there. Which particular brand of soap-opera problem mom is she? Let’s find out together! 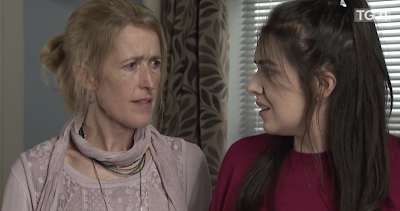 Chez Daly, the entire family is crammed into the kitchen and everyone is looking nervous because Katy is saying and doing things. To be fair, that never ends well. There’s discussion of going to the annual Ros na Rún Fir vs Seanfhir football match, which is being held between the dumpsters at Recycle Bin Park because Aviva Stadium was booked, but things get chilly when Katy offers to stay home with Bláithín because of course Dee would rather gnaw off her own leg than let Katy borrow her curling iron, much less her baby. Katy even offers to make Bláithín’s dinner, but Dee thinks it’s not a good idea since Bláithín is very fond of her routine right now and is also allergic to poison. She and Mack leave, but she hangs out in the doorway to eavesdrop on Katy and John Joe discussing Katy’s plan to talk to Tadhg about resuming her mismanagement of Gaudi. We finally find something Bobbi Lee is good at—other than being fabulous, of course—and now Katy’s going to come bollix it up. 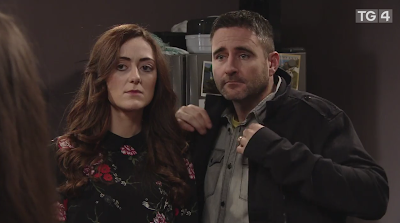 I Kissed A Boy And I'm Not Sure I Liked It

It’s the morning after the hen party, and we open with a close-up of a pile of vomit on the sidewalk that Máire is trying to sweep up. Dee walks by and nearly spews again at the sight and smell of it, and also the fact that she’s clearly the one who did it. She keeps trying to walk away, but Máire wants to have a quivery-voiced conversation about the general Sodom & Gomorrah-ness of it all. We knew this would happen if they let the gays get married. Eventually Dee gets recruited to push the vomit around with a broom as Máire repeatedly reconstitutes it by pouring water on it, which involves Dee having the dry heaves a lot plus many tight shots on the pile of sick so we can appreciate how realistic it is. OK, special-effects crew, we get that you put a lot of work into concocting this, or perhaps you all just took turns barfing on the pavement to see whose read the best on camera, but STOP SHOWING IT TO US. 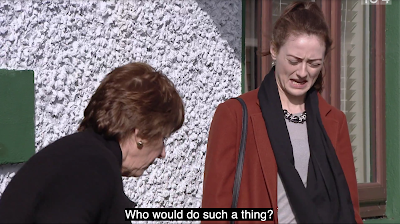 Elsewhere, a hungover Mo, one of many people we will see today looking like they’ve been dragged backward through a hedge, staggers out of her bedroom and checks her phone, on which she finds a text from Bloody Fiach asking her how her head is. (If you have ever seen RuPaul’s Drag Race, you are laughing at that question.) She quickly deletes it, and the look on her face makes it unclear whether she is just starting to remember what happened with him last night or remembers it in appalling, terrifying detail. Either way, it seems picking hot-pink boa feathers out of every nook and cranny of her body and home is not going to be the worst thing she has to do today.

Girls Just Want to Have Fiach

You’re back! I missed you!

We open at the pub, where Bobbi Lee not-at-all discreetly stashes a bunch of shopping bags full of blow-up dolls wearing feather boas behind the bar so she can assure Mo she doesn’t have anything tacky planned for tonight’s hen party. She shouts from behind a giant vibrator that we will be experiencing PURE CLASS, and Mo reiterates, “I don’t want any nonsense or anything rude.” Unfortunately for her, Bobbi Lee’s middle names are “Nonsense” and “Something Rude.” Also “Jolene.” Anyway, Bobbi Lee assures her it will be extremely civil and posh, like having dinner at Buckingham Palace or walking in on Colin Firth and Dame Judi Dench having sex in a fitting room at Harrod’s. 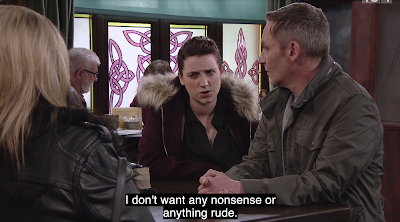 Speaking of pure class, Caitríona waltzes into the shop just as Vince is stocking roll after roll of toilet paper, something Caitríona herself has never seen because she is JUST THAT CLASSY. She’s dressed to the nines for Maeve’s Nutty Pops commercial audition, and then summons our little Meryl Streep to show off her own, erm, “special outfit.” A grim Maeve emerges from upstairs wearing a number of pieces of clothing I do not know the name for in Irish or English, in various shades of Pukey Pink and Fugly Mauve, and so much makeup she can barely hold her head up. You know it’s bad when even Vince, who is up to his neck in Caitríona’s shenanigans around the clock, can’t make eye contact with anyone. Caitríona beams that she’s a shoo-in to get the part, and poor Maeve, whose hair is pulled back so tight her feet aren’t even touching the floor, looks grim, like Shirley Temple played by Morticia Addams. 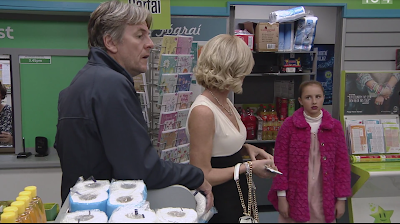