Scream If You Want To Go Faster

Welcome back! Let’s journey together, through the magic of Ros na Rún, to a time when we could eat in restaurants, speak to people in the street, and most of us could go out in public without always accidentally kissing Mack, Katy. Yes, it’s the village of Ros na Rún in The Before Time, when sneezing in someone’s face was met with good-natured laughter and nobody worried much about coughing, unless of course they were Maggie.

We open this episode, directed by all-around good egg Eamonn James Norris, in the Daly kitchen, which this season has been the scene of 50 percent of all screaming and 90 percent of all screaming the word “faduda.” The other 10 percent is a mobile circle one meter in diameter that follows Katy around. Dee flounces into the kitchen where John Joe and Mack are attempting to operate a kettle and a coffee cup, respectively, and we can tell she’s in a good mood because her ponytail is swinging so bouncily that it’s sweeping the pictures off the walls. Mack looks afraid, which is of course always the sensible response to watching Dee enter a room, and she brightly explains that she’s printed out their tickets to Australia, which she sticks on the fridge. He asks why she’s printed them out given that nobody under the age of 900 does that anymore, and her non-answer is, “We’re leaving in a few days, so why not?” She and her ponytail exit, and you can tell by the intensely brooding look on Mack’s face that the toast he’s holding is about to get the buttering of its life. Another reasonable question might be where Dee obtained actual airline card stock on which to self-print her tickets, but I digress. 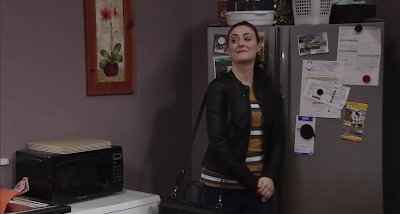 Over at the flophouse, the population of which has grown so rapidly since our last recap that it is now the third largest city in Ireland, Sorcha’s mother is anxiously suggesting places the two of them could go today instead of her doctor’s appointment, such as a couples root canal at Tayto Park or to have their skin burned off with lavender-scented sulfuric acid at Loinnir. Sorcha replies supportively that she knows her mother, whose name is apparently Sadie but whom we will always think of as Bettina, is nervous about going to the doctor, but reminds her gently that they’ve been waiting a long time for this appointment, and that everything will be OK. It would be more OK if the town doctor were still sexy Easter Island head Dr Tiarnán, rrowr. Sorcha has been lovely during this storyline, which is kind of a bummer, because she was a lot more fun when she was a complete snot whose main function was to annoy everyone with her stank attitude and problematic jam.