It’s a peaceful morning in Ros na Rún, by which I mean nobody is being shoved screaming into a police car, burning down a building, or threatening to jump off a roof yet. Still, these people are very resourceful, so we should give them time. We open with an annoyed Mack ignoring a series of phone calls and texts from Katy, and we get the impression that this has been going on for some time, and also that the mental hospital should perhaps supervise their “more fragile” patients’ phone use more closely. The latest text asks “Have you seen the DNA test yet? [eggplant emoji eggplant emoji].” That last part is implied. He pulls the scrap of paper with her email login and password out of his pocket, considers chucking it in the bin, but then sits down at the table where someone’s “Masha” brand laptop has presumably been downloading and installing Windows updates for the past eleven hours. Masha: The Computer Made By Albanians For Albanians. Just as he’s about to enter the password to Katy’s email account, Dee bursts in with a gaggle of children, at least 80 percent of whom were fathered by Mack, so he slams the laptop shut, which of course makes it look like he was looking at porn. 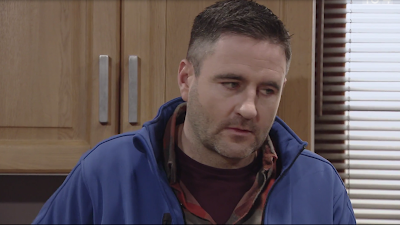 Elsewhere, a drug deal reminiscent of the one in the opening credits is happening in the street. Upon closer inspection it turns out to be Sorcha slipping Briain a scrap of paper— which may or may not have been ripped out of the same pad as Katy was using at the hospital the other day—with the name of someone she knows at So You Ran Over An Old Lady Motors. He’ll be able to get Briain a mirror for his 1982 Reliant Robin to replace the one that broke off in Jude’s torso, she explains. Just then Berni pops out of a doorway and hilariously bugs her eyes out at the sight of her intermittent soulmate fraternizing with the enemy. She flies up in Sorcha’s face and starts screaming at her, hissing that she warned her not to show her face around here again. I knew the people of Ros na Rún would regret that referendum that gave Berni the right to decide who can and cannot exist. Furthermore, she rants, she can’t believe she was so stupid as to give Sorcha another chance after all the other times she has screwed things up and caused drama. It always pains me to admit when Berni is right about something, but this is one of those times. Berni says that trouble follows Sorcha wherever she goes, which is rich coming from the woman who has been almost murdered by half the people she's ever met. Anyway, Berni concludes she is done with Sorcha, DONE! Of course everyone else who has ever met Berni, including Briain and Evan, would be thrilled to think she was DONE with them forever, but Sorcha looks sad, and after Berni storms off, she and Briain exchange pained glances, which in Briain’s world constitutes foreplay. 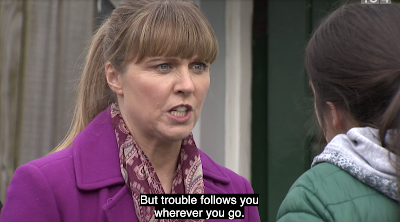 We’re back for another season of thrills, chills, and windmills in our favorite Connemara crazytown, Ros na Rún! You may recall that before we left for the summer, all hell was breaking loose: Briain and Sorcha had sex as foreplay to get them in the mood to hit-and-run Jude; Andy, in the role of Che Guevara, extorted tremendous amounts of money from Michelle; and Vince, Caitríona, and Maeve went to Tayto Park! Oh, also a screaming Katy got hauled off to the mental hospital in a police car while foaming at the mouth and clawing at the glass. So, a typical Thursday in Ros na Rún. 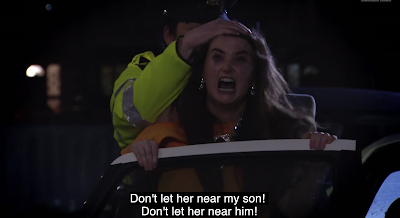 We open at the hospital, where Katy is sleeping off the six to eight tranquilizer darts it took to get her into the bed in the first place. It’s nice that they gave her a bed with linens that have clearly never been used before and in fact still have the straight-out-of-the-package creases in them. She starts muttering Jay’s name and then wakes up to look confusedly around the room, calling out “Jay!” again, although I suppose it is also possible she is trying to ask someone, “Cad é mar atá tú?” but loses consciousness halfway through the question. 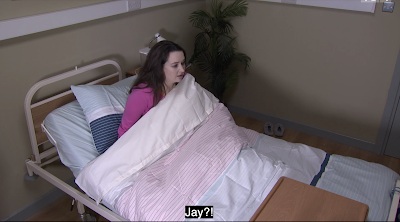 Back in town, Mack drops Jay off at the crÁeche and then a radiant Dee takes his arm and they stroll happily across the road, with baby Bláithín in her stroller, and Dee has that classic I-just-gaslighted-my-sister-into-an-asylum glow about her, that’s for sure. 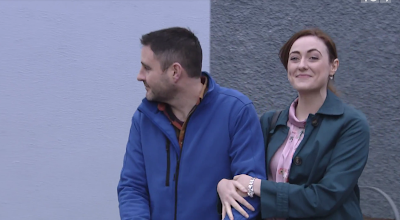