Today, on a very special Ros na Rún, everyone expresses their emotions honestly and constructively and honors themselves and those around them by acting in ways that reaffirm human dignity and show compassion and empathy to all. Ha ha, I’m kidding, everyone is a complete fucking basket case as always.

We open with a montage of various people flipping through a prop magazine printed on an extremely stiff paper stock that is definitely used by a lot of actual magazines, that’s for sure. The pasted-on photo that catches first Dee’s and then Tadhg’s eye features Jason in a tux with a pretty blonde woman identified as his “partner,” Somebody Ní NotKaty from Cork. I should point out that Dee and Tadhg are looking at their magazines in their respective kitchens, although I do enjoy the mental image of the two of them hanging out flicking through magazines and pointing out hairstyles they do and do not think would look good on themselves. Anyway, there is a lot of eyebrow raising, presumably because they subscribed to Hiya! magazine to see photos of celebrities, not Effing Jason, but then Tadhg is interrupted by Frances, who has let herself in to argue pointlessly with him about how they need to divide their assets and, you know, get divorced already. He’s rude and dismissive before walking out on her, and she sighs loudly and looks surprised, because she has never met him before.

Over at the café, intermittent hoodlums Sorcha and Adam are celebrating the fact that she has completed her extensive health and safety training and been certified by the EU to start pumping gas today. I hope there is money in the special effects budget for the inevitable fiery explosion we get when she flicks her lit cigarette at a puddle of spilled gasoline to “burn it off.” Cóilí Jackie arrives and she starts haranguing him because he is dressed inappropriately (i.e., the exact same way he is always dressed) for his court date today, and he pahs and bahs that he’s not going because they’ll fine him either way, and also he’s curious whether failure to appear is a misdemeanor or a felony or what. 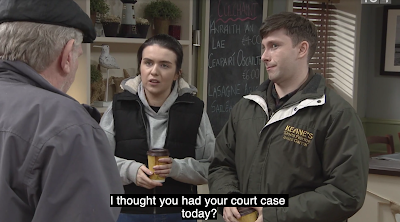 We all know the stars of Ros na Rún are great actors, but they’re also a talented bunch in so many other ways. Annamaria Nic Dhonnacha is a singer, Colm Mac Gearailt is a scholar, Máirín de Buitléir is a dancer, and, of course, Domhnall O’Donoghue is a writer. The man we all know and love as Pádraig is a travel journalist, magazine columnist, and a novelist, among other things, and his second novel, Colin and the Concubine, is out this week. I caught up with the man himself for this brand new Q&A, where he tells about the new book, how he balances writing and acting, and what we might expect from Pádraig in the weeks and months to come. 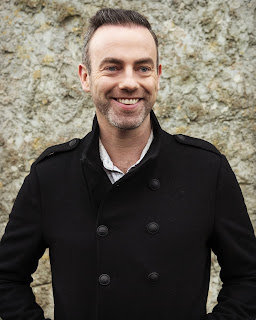 I’m a bit off schedule, recapping an episode from last week, but this one is too special to miss, so here we go. It’s directed by our pal Eamonn Norris, filmmaker extraordinaire and all-around good guy, who if I ever meet in person I will ply with round after round of drinks, a) because I like him and b) in hopes of getting scandalous tales of Domhnall O’Donoghue’s lurid past out of him.

We open out in the street, where Mo asks the increasingly skeevy Fiach how Jennifer is doing after yesterday’s chemo. On one hand, it’s nice that Mo cares about Jennifer’s well being in spite of her relentless awfulness, but on the other hand, we can’t help feeling that if she’d stop encouraging them, Jennifer and Fiach would both go away. I’m just saying. Anyway, Fiach says that Jennifer is tired, probably of him but possibly also of other things, and that she’s not up for visitors, so therefore Mo should come over for dinner tonight. Oh, good lord. Mo agrees, because she believes in the innate goodness and dignity of all human-type beings and has also apparently suffered a series of recent head injuries, and as she walks off, Fiach looks smirkily pleased with himself. I am, of course, a consummate pacifist and am against violence of all kinds, but also hope somebody punches Fiach in the junk in the near future.

Speaking of people who need to be punched in the nether regions, over at Caitríona’s we are subjected to the return of Tommy, whom we last saw being hilariously Thelma-and-Louise-d by Berni and Bobbi Lee. It seems she has hired him to go install hidden cameras over at the radio station to monitor Sonia’s activities, because Caitríona hates her and has tortured Vince till he’s a smoldering husk and therefore needs a new toy. Surprisingly, Tommy asks her whether this is legal, a word we wouldn’t have thought would be in his vocabulary, but she insists it is. This will be a good case for Dee to take on the next time she needs a break from murdering Katy. Tommy agrees to do it, but protests weakly that he doesn’t think it’s right, another concept we doubt he’d concern himself with, so she tells him she’s not paying him to think about what’s right and wrong and that he’ll shut up and get installing if he knows what’s good for him. He flirts with her grossly for a while before she throws him out, at which point she looks somehow surprised that someone she found in the Uncredentialed Day Laborers section of YuckosForHire.com is morally questionable. 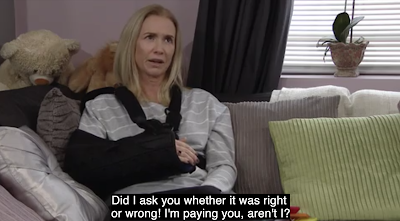