Ros na Rún features one of the best casts on television, and it keeps us entertained with a mixture of new characters and those who've been around since the beginning. Since her introduction in season 20, Dee Daly has been involved in some of the show's biggest and most explosive storylines, from her battles with her sister Katy to legal wrangling in the courtroom to her never-boring relationship with Mack. So I'm thrilled to share with you this interview with the woman who brings Dee to life herself: it's "8 Questions with ... Máirín de Buitléir!" 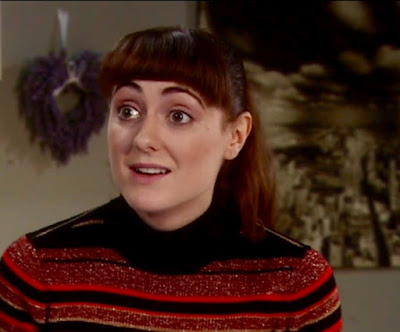 The work. I love the diversity of my days and the energy on set. I love going in every day knowing that everyone in all roles are giving their all constantly. We're a team. Everyone is focused on their own role and has confidence in each other. It's a pleasure to call it work.

We are similar in that we are both straight-talking strong women. We're different in basically every other way. I think if we met in real life our first impressions would probably be Dee thinking I'm a bit eccentric and me thinking she's a bit straight laced. Once the conversation starts we'd get along just fine, I think, as we both love talking!

Myself and Brídín are best friends in real life and have been since school. Thankfully we spend more time laughing together than Katy and Dee. Both of us have only brothers and we've always been like sisters growing up. Playing sisters on the show is a dream come true. Katy and Dee's relationship mostly derives from sibling rivalry. They are total opposites and have never seen eye to eye. It's a complex relationship in that even though they have hurt each other, their blood bond as sisters is unbreakable. I personally prefer scenes were we're not getting along. I love the drama.

Do you have any funny/weird/interesting anecdotes about working on Ros na Rún?

Dee has been involved in some very complex ethical and emotional storylines since she arrived on the show in both her personal and professional lives. What are some of your favorite storylines you've been a part of?

She has indeed. Thankfully I love all my storylines. My storyline in my first season with Ros na Rún, which was season 20, is the epitome of her personal and professional life colliding. Dee was working on one of her first high-profile cases defending an alleged pimp and she had just started seeing Mack. She broke it off with him when she finds out he is a witness for the case against her client, meaning she'd be questioning him in court. Doing the court scenes were a highlight for me. Dee won the case, but paid dearly for it personally. The pimp she defended sexually attacked her in her office, but Katy saves Dee. Doing the attack scene was a lot of pressure as it's a very serious matter, but everyone on set was very tactful and professional. I think the moment between Katy and Dee after Katy saves her was so special.

Besides Ros na Rún, what are some of the other things you've done professionally, and what new things would you like to try during your career?

I've done choreography for music videos, dance crews, and stage shows, and I've worked with Cúla4 on fun dance segments for kids. I love dance. I've directed my own short film which was shown at film festivals around Ireland. I've written a script which came Top 5 in the screenwriting competition Físín. I've done presenting work, and I've just finished doing my first voiceover work on a cartoon. Trying new things is important to me. Currently my plan is to focus on building on the skills I've got and to utilise them more, but I'm always ready to try something new!

If Dee went to karaoke, what song would she sing?

I'm happy to be where I am and I'm very lucky to do what I do. There's many places I want to go to, things I'd like to do and people I'd like to visit, meet, and help. Right now we're in the middle of our filming season, so here is where I belong. There is plenty of time for travelling and adventures in our time off. 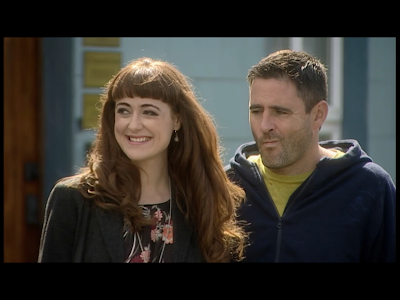 And there you have it! I absolutely love Máirín's analysis of the Dee/Katy relationship, and also loved finding out about her long friendship with Brídín Ní Mhaoldomhnaigh. I think their offscreen relationship really shows in their onscreen chemistry.

Thanks again to the fabulous, multitalented Máirín de Buitléir for taking the time to tell us about herself in her own words! Keep watching Máirín this season on Ros na Rún to see what Dee gets up to next, and as always, then come back here for recaps and discussion!