In my Ros na Rún Q&As I've been working hard to talk to people who work on the show in various ways to give a well-rounded idea of what it takes to bring it to life and to our TV screens. Today's Q&A is with one of the people at the center of keeping the production running and making sure everything comes together like it's supposed to: production manager Louise Richardson! Here she tells us about all the plates that have to be kept spinning to produce the show, how Ros na Rún is a family business for her, and why she thinks Tadhg and Caitríona would be good bosses! 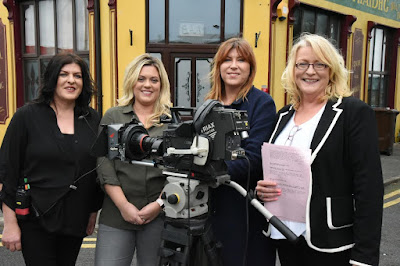 (Louise with her aunts)


What do you do as the production manager at Ros na Rún and what is a typical day like?

My main role as Production Manager is to look after the day-to-day running of the production so that it all runs as smoothly as possible. We work at such a fast pace that it’s important to keep things on track. I put together the production schedule for the season so that everyone knows what we’re filming and when and also what transmission dates the episodes have.

I make sure we have all our crew for the season. I attend meetings with the scripting department, liaise with the editors regarding episode deliveries, and generally deal with the production staff.

I’m not sure that any two days are ever the same at Ros na Rún! But that’s what makes it so enjoyable.

What was the career path that led you to Ros na Rún and what are some of the other jobs you’ve had?

I’ve actually always wanted to work in Ros na Rún, ever since I was 15 and I did a week’s work experience as part of that school year. I fell in love with it instantly. I like to believe it’s in my blood as three of my aunts and my uncle (all siblings) have worked or still do in Ros na Rún. The current series producer is my aunt Déirdre Ní Fhlatharta. Her sister Kate Ní Fhlatharta is one of our senior script writers. Their other sister Marguerite Ní Fhlatharta is the props buyer and my uncle Michils has done carpentry work with us too!!! My mother, Bernie Ní Fhlatharta is also in the media (a journalist), so it seems like I was destined to follow in their footsteps.

I came to Ros na Rún shortly after finishing college. I applied back in 2008 when they were looking for crew and ended up being hired as the production secretary. I did that for a year and then was trained to be a stage manager for the following season. After a year of that, there came an opening as a floor manager, so I got the opportunity to train as that and continued in that role for 4 seasons. After that I took the role as production coordinator, which in Ros na Rún meant I was responsible for putting the shooting schedule together every week. That was a tough role, let me tell you! And now here I am as production manager.

Ros na Rún has a longstanding reputation for training and I feel like I’m a prime example of the benefits of that training.

What do you think people would be most surprised to know about making Ros na Rún?

I know other people who’ve done your Q&A’s may have already answered with the same thing, but the amount of work that goes into it! Or how far ahead we are. We’re just finishing up our Christmas episodes even though it’s mid-October. We’ve also already storylined the first 18 episodes for Season 23, which begins filming in August 2018.

How many people are involved in making the show?

There’s about 160 people employed with us throughout the year. The majority of our crew, and our actors, only work for the six months we’re filming. We have a huge scripting department and story team who work non-stop (we chain them to the desks!) throughout the year to come up with all our amazing stories.

That’s a joke about the chaining to desks of course….

Do you have a funny/weird/interesting anecdote about working on Ros na Rún you’d be willing to share with us?

What happens on set stays on set!! I joke. I’ll always remember, I wasn’t long working in Ros na Rún we were filming and Eoin Mac Diarmada who played Donncha, Vince’s son, was filming the scene of his own funeral. He was laying in the coffin and just after the scene began he sat up and let out a roar which scared the life out of everyone as they weren’t obviously expecting it! It was very funny!

I think I would like Tadhg as a boss. He’s a hard nut to crack but I think if you managed to work for him you could work for anyone…just don’t get on his bad side.

If I was the type of person who didn’t want to do a whole lot of work, then I think I’d like Caitríona as a boss. She’s usually too preoccupied with her own life to notice if anyone is actually doing any work!

Not including Ros na Rún, if you could work on *any* TV show, which one would you want to work on and why?

I’d love to work on a crime drama I think….I’m a little obsessed with Criminal Minds and Law & Order. I used to want to be a lawyer, so that’s probably why! That said, our crew are all such close friends that I’m sure I would miss them (#clannrosnarún).

I would be on some sunny island by the pool with a cocktail in one hand and a good thriller novel in the other! But I’ll have to wait until we stop filming in February for that. I consider myself extremely lucky to be in involved in this industry and getting an opportunity to learn new skills everyday by being surrounded by really talented people. 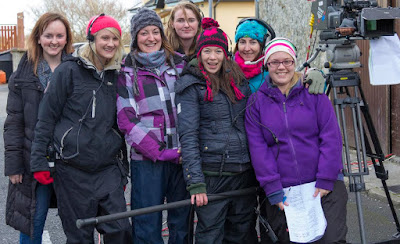 (Louise, in purple at right)

And there you have it! Thanks to Louise for this fun and interesting look at her work on the show and for revealing more of what goes on behind the scenes at Ros na Rún. I thank her for her time and efforts! Stay tuned for more Ros na Rún Q&As, and if you're a part of team Ros na Rún who'd like to be the subject of a future Q&A, please contact me. I'd love to feature you!