If You Like It, Then You Shouldn't Put A Ring On It

We open this episode with Mo and Colm, who are very nervous, and not just because they’re eating Berni’s special of the day, sushi soup. Mo’s due back at the hospital this afternoon for what will hopefully be her last visit for a while. Katy breezes in to order scones for her dad, who it happens is coming home from the hospital today with a clean-ish bill of health, by which we mean his heart is beating much of the time and he’s hardly bleeding from any of his orifices. The doctors were worried when his face was suddenly covered with blood, but it turned out it was just from Noreen repeatedly stabbing Imelda with a pen.

There are a lot of sickies in this episode, so let’s go visit another of them by cutting over to Caitríona. The neck pillow she’s ordered has just arrived, and she immediately starts moaning rapturously about how much more comfortable she is with it on, even though she’s been wearing it for half a millisecond while standing at the kitchen counter where it is doing absolutely nothing. “Placebo” is Latin for “shut up, Caitríona.” Poor Vince seems skeptical, but we also suspect he’s popping so much Xanax to combat his shellshock that at this point he thinks she’s two talking snowmen. She hobbles over to the couch and places an order for the radio and her laptop to be delivered to her so she can listen to what a bad job Sonia is doing while simultaneously sending menacing emails to Maeve’s teachers and spying on the salon via the nannycam she’s implanted in Gráinne’s neck. Even here on the brink of death, Caitríona is a multitasking pain the ass. 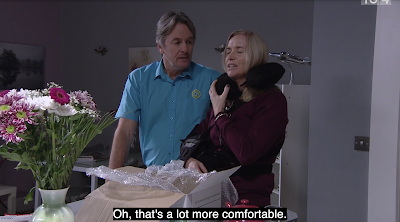 We open in the shop, where a disheveled Caitríona comes hobbling in on crutch with her arm in a sling and wearing the remnants of her evil stepmother costume. She looks like Stevie Nicks after spending the night in a ditch full of Klonopin. Vince narrates that she broke her collarbone and ankle when Bobbi Lee dropped a house on her, demonstrating that Bobbi Lee actually can work efficiently when she wants to. Caitríona is in a foul mood and takes it out on innocent bystander Berni, which we are totally in favor of, but then Briain comes in and takes Berni’s mind off it with a drive-by suggestive smirk. 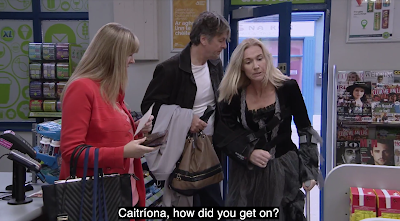 Over at the café, Bobbi Lee is holding court about how her natural superstardom saved the day at the panto, but Gráinne helpfully (i.e., unhelpfully) notes that Caitríona was the real star because her adlibs were funnier than anything in the script, which, by the way, they all know Niall wrote. Bobbi Lee appreciates this about as much as you’d expect and lashes back that Gráinne won’t be so smug when Caitríona sues her for her panto-induced injuries. In case you’re wondering why Caitríona would sue Gráinne, I’ll save you some time now by telling you that later on we are reminded that Gráinne was the producer of the panto. You’re welcome. Anyway, she looks pained, presumably due to PTSD from the various seaweed-related lawsuits she’s been involved in the past few years, such as when the viewers sued her for not ensuring Annette’s slip-and-fall injuries were fatal. 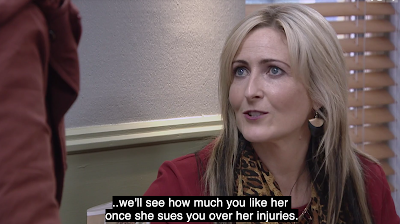 The Show Mustn't Go On

We’re back after a couple of months away, most of which involved Adam getting arrested for things he didn’t do, Cóilí Jackie almost shooting David in the crotch, and Dee slowly losing her mind. So, business as usual. We open today, which features the long-awaited return of a familiar stubble-faced hunk from ye olden tymes—I’m talking about myself, of course!—at 3Arena or wherever the panto is taking place, which is a busy hive of activity, and also bees. You might think of Christmas as a distant memory now that all the crackers have been cracked and decades of built-up family hostility have been buried for another year, but here in Ros na Rún the holidays rage on, mostly in the form of Vanessa. She’s carrying a black garbage bag in Berni’s direction, but sadly is here to apologize to her rather than fill it with oranges and bludgeon her with it. She explains that she bit Berni’s head off last episode because she was surprised to find out Niall and Bobbi Lee are a thing, what with her expecting him to be celibate from now on and all. Well, when you leave your DILFy ex-husband on a soap opera full of known floozies, you deserve what you get. Berni accepts her apology, agreeing that this is all pretty messed up, and then reminds her that the important thing is Liam Óg, who is now at the critical developmental age of two or twelve or something.

Onstage, Mack stops stringing fairy lights up a donkey’s arse long enough to tell Niall that he’s really bollixed this situation up. Niall sadly agrees, adding that there’s no way he could’ve predicted a relationship involving Bobbi Lee would be problematic in any way. He realizes he needs to apologize to Vanessa, who’s walking around looking sad everywhere. Another option would be for Vanessa, who broke up with him, to grow up and stop making everything about herself, but maybe that’s just me. Niall goes down to gabh Vanessa’s leithscéal, but is interrupted by Gráinne, who is here to make everyone do her work for her. Caitríona has taught her well. She drags Vanessa off to iron the walls, and Niall looks sad, partly because of this Vanessa situation and partly because he has read the script of the panto that’s coming later. 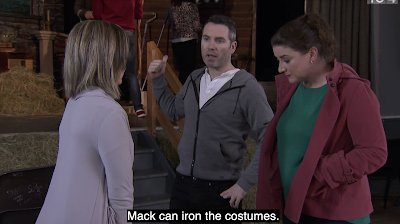 In town, on-again-off-again frenemies Imelda and Laoise seem to be on for the moment, although Laoise is doing her best to stir up trouble and make everyone around her miserable. She asks how noted patient John Joe is doing, and Imelda has to admit she doesn’t really know since nobody from the hospital will tell her anything and Noreen is guarding the place like it’s the end of a Super Mario Bros. level. It’s OK, the princess is in another castle anyway. Laoise helpfully reminds her that Katy and Dee are a couple of bitches, and when Imelda reasonably replies that she doesn’t want to go someplace where she’s not welcome, Laoise retorts that if it were Micheál down at the hospital set, she’d be down there marking her territory posthaste, no matter how much of a wagon Réailtín is. That last part is implied.