So here's a Ros na Rún confession I've never made: the first character I really remember from the very first episode I ever watched is Gráinne. I can't remember the details anymore, but I think she may have been working in Vince's shop (?), and at one point she went somewhere in a car, and then there was a car accident, and we were meant to wonder if it was her, but it turned out to be someone else (Lee?).

Anyway, I was traumatized, because I had just discovered this great new show, and then it looked like they were killing off the very first character I adored. And then she ended up leaving for almost an entire year to go away to study nursing in London anyway, and I keenly missed her the entire time she was gone, and was thrilled when she came back.

All this is to tell you that I absolutely adore Gráinne as a character, and Brídín Nic Dhonncha as an actress, and I can't imagine the show without them. So I'm very happy that the latest star to step into the interview hot seat -- such as it is -- is the woman who brings Gráinne to life herself. It's "8 (or so) Questions with ... Brídín Nic Dhonncha!" 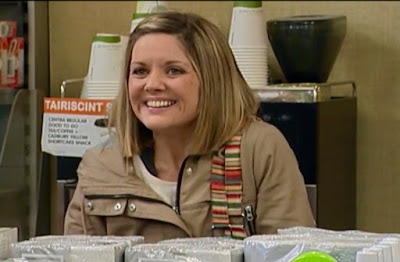 I have learned a lot being on Ros na Rún, and I really like what the writers write for me, as you never know what you're going to get with Gráinne. She's now a naturopath, but she used to be a drug dealer. She has been on so many journeys and I love playing her. I've had some super storylines. My favourite was one I had a few years ago when it was found out Gráinne was sexually abused as a child. I had big long scenes with JD Kelleher and he gave it socks! He has a wonderful energy. But as much as I love being a character on Ros na Rún, there is something even nicer about working on Ros na Rún, and that's the real camaraderie between cast members and with crew. Some of my best friends work on Ros na Rún and we laugh a LOT!

We're similar in ways. We have the same high pitched voice, unfortunately...

Gráinne can fly off the handle as I can, again, unfortunately. I could never go out with someone who was once in the priesthood, as I'm an atheist, and Seán who plays David knows this and likes to play up the piety in his lines!! He's absolutely loves to play up the 'God is good' lines and he looks deep into my eyes and watches me squirm. He gets a real kick out of that. I have to play along and nod sweetly.

I'm also a beautician and a masseuse in Ros na Rún and I know very little about either profession, as the make up department knows well in Ros na Rún as I'm kind of rough around the edges!

Which of your co-stars do you think is most like the character he/she plays and which is the most different?

I'm happy to say nobody is very like their character as most characters in Ros na Rún have a lot of bad traits. The baddies, like Tadhg, Colm and bold little Áine are really nice in real life, thankfully!!! Mo is a lot more serious than Marie is, Anna Maria is not a fool like Bobbi-Lee, but very funny in real life too. Domhnall, I think, is much more into drinking coffee than serving it, and is not a busybody like Pádraig. And Seán, who plays David, does not wear an anorak, ever!

That there are no (well, very few) rows between us! We film our summer scenes in January and February, so people might find that strange. We're normally in light costumes and freezing! We may have 3 thermals under a light summer dress. It's a really busy time for wardrobe crew. We're quite a bit ahead as we only have six months to shoot the season. Otherwise nothing really, other than the brandy is ginger ale, and that the wine is grape juice.

Is there a funny/weird/interesting memory or anecdote about the show you'd be willing to share with us?

My very good friend, JD Kelleher, played the part of Breandán a few years ago. Breandán abused Gráinne as a child. When I met JD first he was wearing a beige mid length jacket and I commented how suitable it was for playing a creep. He turned to me and said, 'This is not wardrobe, this is my own vintage 1960's Burberry jacket.'

I sat there red faced and very apologetic. He seemed very, very upset that I didn't like his jacket, but in hindsight I think he was having me on. I thought we wouldn't be friends after that, but thankfully he forgave me!!! We haven't spoken about that jacket since. I guess this will be a harsh reminder.

If Gráinne went to karaoke, what song do you think she'd sing?

She'd like to attempt 'Kozmic Blues' by Janis Joplin, but Gráinne sings as badly as I do, so I hope she'd have the sense to sit it out!

I'd like to go to Madagascar someday, and I'd love to live in France. But I'm very happy in Conamara when the sun shines, and when the wind doesn't blow. We have beautiful light here, and when the evenings are long and sunny I feel really happy. I like to sit and listen to the birds and the grasshoppers and look out to the sea.

Marie Bheag (Mo), has a proper laugh when I say things like that. I think her favourite hobby is slagging me. She's lucky I'm so fond of her 😊 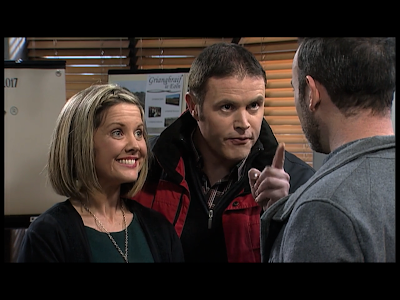 I'm sure I'm not the only one who is now unable to stop imagining Gráinne in full Janis mode at the karaoke bar! Oh, and I for one love Brídín/Gráinne's voice!

It was such a pleasure to "talk" to Brídín, who's been so kind to me over the years I've been writing this blog. Thanks for your time, Brídín, and we can't wait to see what surprises are in store for Gráinne when season 22 starts on September 5!
Posted by Rich at 8:47 AM