There are some great actors who are very flashy and commanding and Shakespearean, and when you see them, you think, "Wow, he/she is really ACTING!" Then there are others who are so natural that you forget you're even watching an actor performing a character: you're utterly transported to their world, where their character is a living, breathing person. I've always been much more a fan of the latter type of actor, and for me, Marie Bheag Breathnach is one of them. She makes Mo a real person, and she's one of my absolute favorites on Ros na Rún. So I'm thrilled to present... "8 Questions with Marie Bheag Breathnach." 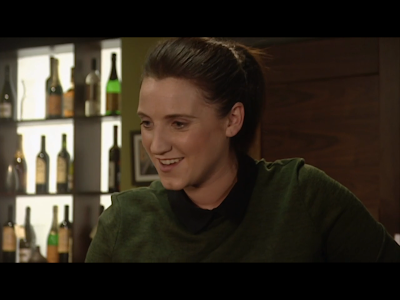 I think my favourite thing is how much fun we have on set and how well we all get along, and how in a sense it's never the same day twice ... you get to do things in Ros na Rún that you might never get the chance to do in your own life.

I think myself and Mo are very similar, mainly being how stubborn we both are, lol. People who know me well would agree, I think, which I'm not sure is a good or bad thing!! I'm not sure we are very different at all, but I think that would be up to other people to decide, haha. I think we would get along pretty well, but I think if there was to be an argument, it would be huge, because neither of us would back down!!

You've been on Ros na Rún for many years now. Do you get recognized when you're out and about in public, and if so, what is that like for you?

I've been on Ros na Rún for 16 years now, and I do get recognised from time to time. It was so strange at the start, but it is really nice to hear such nice comments and meet fans of the show. We really appreciate it when people tell us how much they enjoy it and tell us what have been the storylines they enjoy the most. Sometimes they try to find out about some of the upcoming storylines, so we have to be on our toes and not give anything away.

Is there a funny/weird/interesting anecdote or memory about the show that you'd be willing to share with us?

I remember the year that part of the finale was I would be having a drink, driving a Jeep for the character Michéal, and I was to run over Jason. I didn't know this was to happen until 2 days before, so when one of the actors turned to me and said, "Oh, Mo is going to be a very bad girl on Thursday," I hadn't a clue what they were talking about! Needless to say that was one day of filming I won't forget. I also got punched in the head during a boxing scene, but I won't name the culprit, lol.

If Mo went to karaoke, what song would she sing?

I don't think Mo would be willing to do karaoke -- she would go to the gig, but more than likely not get up on stage as Mo can be quite shy, believe it or not, lol. But she did try her hand at standup comedy once upon a time.

You and Annamaria Nic Dhonnacha, who plays Bobbi-Lee, are great friends in real life, and viewers can definitely see the chemistry in scenes featuring your two characters. Do you two ever get the giggles or have trouble keeping straight faces while doing scenes together?

Myself and the blonde woman have been best friends for nearly 8 years now, and as both of our characters work in the local bar, we share a lot of scenes together and we have had the giggles a fair few times. If it's a busy day we aren't too bad, but there have been times when we haven't even been able to look at each other without laughing. It is great to have the chance to work with your best friend, though, so I was delighted the day she told me she had gotten the part of Bobbi-Lee.

I would be lying back on my couch binge-watching Game of Thrones. I am obsessed with that show!!! 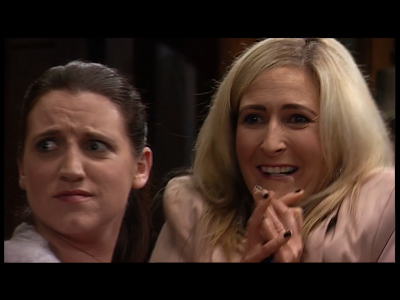 And there you have it! If that Q&A doesn't make you want to spend the day hanging out at Tigh Thaidhg with Marie and Annamaria, I don't know what would! I want to thank Marie Bheag Breathnach for being a good sport and taking the time to answer these questions, and for always being a kind supporter of me and my silly little blog. Thanks, Marie!

Keep watching this space for more Q&As with the people who bring Ros na Rún to life!
Posted by Rich at 10:22 AM